There has been a phenomenal response of community support since the fire that gutted All Saints Church, Fleet on 22nd June. In a little over a month – and in under four weeks since the launch of the All Saints Fund – £10,000 has been raised by the end of July.

Traditionally, on the last Friday afternoon of the school year, the year 6 children from All Saints Junior School would walk to All Saints Church for their leavers’ assembly. But this year, due to the fire that swept through the 153-year-old building, the service was held at the Church on the Heath on the Elvetham Heath estate. There was a presentation of £273.20 to the Vicar of Fleet, the Rev Mark Hayton of money that had been raised from the School’s Summer Fair.

Rev. Roy Woodhams, a former Vicar of Fleet and now Rector of Cranleigh and his daughter Martha had been due to perform in the popular mid-week lunchtime concert at All Saints Church at the start of July. The concert had to be rearranged after the fire and was held at St Nicolas, Cranleigh on 5 July. The audience of more than 150 people responded generously, adding more than £2,000 to the church appeal. 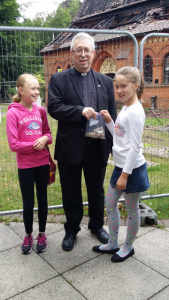 Alison and Becky raised £80 with a bake sale

Amongst the other donations to the fund were Alison and Becky who raised £80 with a bake sale and the staff from NatWest Fleet branch have collected £715 pounds from customers. 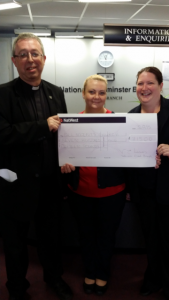 Staff from Natwest Fleet Branch who have collected £715 from customers

The building works and re-roofing costs of All Saints church will be met by the insurance company. However, there will be many other costs involved before the church can become a fully operational part of the community in Fleet again. When launching the All Saints Fund, Rev. Mark Hayton said “The PCC and community of All Saints have been heartened by the support we have received from the community of Fleet following the fire. We are hugely grateful for all the offers of help and support, both financial and otherwise.”

A new website has been launched – http://ariseallsaints.uk/ – dedicated to the efforts to restore the church to its place at the centre of the community in Fleet. This will be providing regular updates on the progress being made, as well as details of fundraising events. The site has already received over one hundred offers of help and can now receive donations by secure online payment, as well as cheque and cash donations.