Since the Great Fire of 22nd June it appears that little has changed except the fence and the security guard. Remedial action will soon be apparent so I will explain what has happened so far. 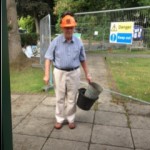 As the fire burned our Bishop and Archdeacon appeared, so right from the start the Diocese were informed and we had the Bishops guiding prayers for the future. The Standing Committee then met soon afterwards and was enlarged by invitation to Richard Buller, Jenny Thorne and Nic Evans and it has met regularly since.

On advice, Nick Doran and myself appointed our Quinquennial Architect Robin Nugent to assist with the initial phase of the work which was to make the site safe and to then to clear the rubble. We have had several discussions with the Ecclesiastical Insurance Company, Crawfords the Loss Adjusters, their Structural Engineer and Richfords their Emergency Contractors who provided the Fence and Security guard. 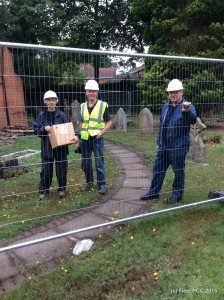 The Churchwardens – or Bob the Builder?

We have had meetings with Hart District Council and communications with the Diocesan Advisory Committee resulting in the Chancellor of the Diocese giving us permission to proceed with the initial phase of the work.

The PCC has now appointed 3cRisk as Principal Designer and Richfords as Principal Contractor to meet Health and Safety requirements. An Asbestos survey has been carried out and its removal planned. 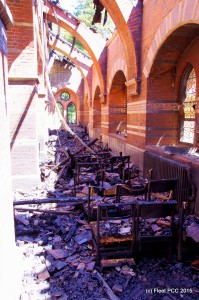 South Aisle facing east – toward the site of the Organ

With regard to the damage caused by the fire we can say nothing remains of the Nave and Aisle roofs or Rose window or contents.

The Organ and much of the Chancel was destroyed though not the three Sanctuary stained glass windows . 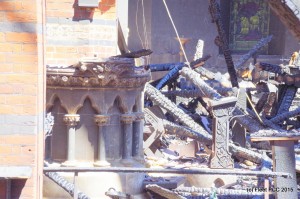 The Lefroy Monument, old Reredos, Font and Pulpit were damaged but a major part of the “Holy, Holy, Holy” wall painting  across the Chancel Arch has survived. We have appointed Hirst Conservation to advise on these Burges matters.

Next week we should see a crane and other machinery arrive to deal with the high level debris and skips for clearing up etc.

The PCC will then start to discuss the process of consultation with Parishioners, the Town and other interested bodies with regard to the future of the building.